The American Nobel prize winner and writer William Faulkner said that reality is always uneven, conflicted and full of contradictions. The only way to organize it into a uniform format is to try and tell a story.

The most significant legacy of humanity from the ancient world is, without a doubt, the writing system. It is difficult to imagine the world without writing. The ability to document thoughts and language and produce memory through a flexible and sustainable communication system is fundamental to our daily existence. The writing system enabled the amazing development of humanity but writing also created alternate memories and narratives, myths and superstitions. Writing did not necessarily document what happened but what we say happened.

The earliest writing system was probably invented about 5000 years ago (about 3500 BC) in Sumer of Mesopotamia, the modern-day southern Iraq, which is considered to be one of the first civilizations of mankind, where the earliest cities appeared and where a complex culture first developed. Although the Egyptian hieroglyphs are also very ancient, there is no earlier evidence for this script prior to 3100 BC. Thus, as far as it is known today, the first writing system used by humanity was developed in modern-day southern Iraq.

The earliest writing found was preserved on clay tablets after being baked in heat. Later, there are findings from the Proto-Sinatitic alphabet from 1700 BC also called Proto-Canaanite, which is a conversion of the Egyptian hieroglyph to an alphabet which, to this day, has yet to be fully deciphered. Ugaritic is another type of script found from around 1400 BC and is also known as the Cuneiform script. This script was discovered on clay tablets in the Syrian region and has a complete alphabetical system, unlike the Sumerian and Sinaitic scripts, which use a logo-graphic system. Around the year 1050 BC, a phonetic script was developed from which the Latin and Roman alphabets were later evolved. And to complete the picture, I will add that the Greek alphabet was developed around 800 BC and the early Latin alphabet was developed around 650 BC.

The Cuneiform script that was found is vast and richer compared with Hieroglyphics script that were found and includes hundreds of thousands of findings on many subjects, such as history, economics, mythologies, etc., some of which have not yet been deciphered.

Writing is a graphical representation of language features. Language is divided into three parts—lexical, grammar and syntactic. Of course, language also has a phonetics component, and the writing system must represent these elements of the language. In language, as is well known, the basic element, the word, must function together with other words in order to produce logical syntax.

The quantity of alphabetic letters in a specific language does not indicate the quality of the written text itself. The effectiveness of an alphabet system is measured more by its grammar and syntax rules than by the number of alphabet symbols. And in this respect, the Akkadian Cuneiform script (which contains about 600 signs) is no less complex than the modern alphabet used in today’s English in its ability to express rich and profound content.

How did the script evolve to the level of the writing system that exists today?

The process of creating a language script is probably similar to the process of the evolvement of modern signs, such as emojis and popular icons that are gradually becoming more and more common. It is probable that if the people of the Sumerian culture from about 5,000 years ago, were exposed to our modern day signs, they would not have understood their meaning. Similarly, we too, today find it difficult to understand the ancient symbols. The meaning of signs is understood over time by learned and acquired skills.

There is ample evidence that the Sumerian culture used different types of signs that can be divided into different groups:

Was the process of using these signs for primitive memory and other purposes, the beginning of an evolutionary process for the creation of writing scripts? It is assumed that these signs evolved into what is known as a pictograph that was a transition from a drawing to a schematic diagram that represented its meaning, making it possible to describe objects using the same drawing. This stage still did not involve grammar or syntax.

How did the transition from a simple system to a complex system occur?

Pictographic writing is also divided into periods. Pictographic script found from later periods included marks dividing the script into different squares (an ancient spreadsheet) to make it more readable as well as to create a more meaningful division of the text – thus the earliest syntax for Pictographic script was created, enabling a more advanced abstraction and richer meaning. As the messages became more complex, more signs that were not pictographic images were created, for the purpose of efficiency and thus the drawing gradually became more and more schematic until it became a convention of signs. It began with the representation of numbers as abstract signs that represented quantity (a special sign for the number 10, the number 60, etc.) and combining them to create larger numbers and was also extended to the abstraction of punctuation and syllables.

The early script was used for accounting needs in large and sophisticated cities in Mesopotamia, alongside the use of drawings representing religious and ritual myths, until the development of a written system for conveying a linguistic range of meanings that perpetuated governmental and religious messages.

When there is a governmental writing system, it requires knowledge to decipher and understand the writing, and for this purpose schools were established to teach and preserve the writing method. Due to the development of parallel writing forms (Akkadian, Sumerian, Babylonian, etc.) there was a need to learn parallel writing methods and even translate between them. Libraries were created that contained tens of thousands of tablets and in this way the writing methodology began to undergo formalization and standardization along with its expanded use into other areas.

We began by saying that writing enables the memory of ideas, but we need to remember that words that convey a message have tremendous power, and when there is power there is a struggle. The description of the past is not necessarily what actually happened. The narratives about the past shape present day beliefs. A story told about the past is a single path from a diverse and vast set of views chosen to advance an interest for producing a uniform culture or story. Therefore, although the written word enables memory, one must understand the power of the word, treat it with respect, but also with criticism. 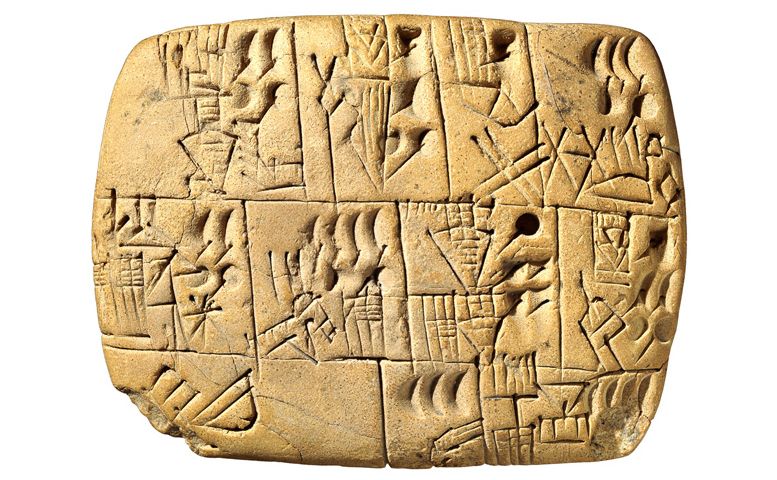